Psoriasis is a chronic skin condition that affects many people. It is characterized by small or large, round or oval, red patches with thick white scales. These patches are sometimes itchy and may hurt or bleed. Psoriasis occurs because the body produces skin at a faster rate than normal. New skin cells usually can take 4 weeks to replace the old skin cells; for patients with psoriasis this process occurs within days rather than weeks. Psoriasis most commonly appears on the elbows, knees and scalp, but may appear anywhere on the body. We offer many treatment and therapy options to help manage the condition. 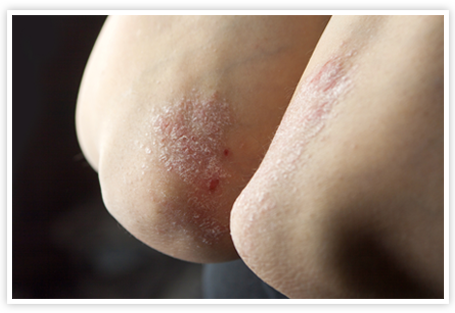 Psoriasis affects about 7.5 million Americans, or 2-4% of the population. The appearance of Psoriasis is bimodal; it appears at two main age groups. The condition can appear in a person’s early twenties (20’s) or their fifties (50’s). It may appear in children, however, it is less common.

Psoriasis is a chronic autoimmune condition that causes rapid accumulation of of skin cells. This accumulation or build-up of cells causes scaling on the skin surface. Erythema, also known as redness, around the scales is fairly common. Typical psoriatic scales are whitish-silver and develop in thick, red patches. Occasionally cracking and bleeding occurs.

Psoriasis is not an infection and it is not contagious. A person cannot “get it” by touching another person with the condition. It is genetically linked (it is in the genes), but the heritability (how a person inherits the condition) is not yet understood.

Scales typically develop on joints, such elbows and knees. They may develop anywhere on the body, including the hands, feet, neck, scalp and face. Less common types of psoriasis affect the nails, and the area around genitals.

Plaque Psoriasis: The most common type  — about 80 percent of people with Psoriasis have the plaque-variety. It causes red, inflamed patches that cover areas of the skin. These patches are often covered with silvery scales or plaques. These plaques are commonly found on the elbows, knees, and scalp. Removing these scales may cause bleeding and cracking.

Guttate Psoriasis: Usually triggered by an infection and causes small pink spots. The most common sites for Guttate Psoriasis include the torso, arms, and legs. These spots are rarely thick or raised like Plaque Psoriasis.

Pustular Psoriasis: More common in adults. It causes white, pus-filled blisters and broad areas of red, inflamed skin. Pustular Psoriasis is typically localized to smaller areas of the body, such as the hands or feet, but it can be widespread.

Inverse Psoriasis: Causes bright areas of red, shiny, inflamed skin. Patches of inverse psoriasis develop under armpits or breasts, in the groin, or around skinfolds in the genitals.

Psoriasis patients have a Forty Percent (40%) chance of developing Psoriatic Arthritis. Psoriatic Arthritis is a chronic, autoimmune arthritis affecting the joints, and tendons. Symptoms include joint pain, stiffness, and swelling, which may flare and subside. Many people with the condition are affected by morning stiffness. Even mild skin psoriasis can have a significant degree of arthritis. The joint deformities of Psoriatic Arthritis may be irreversible.

People with psoriasis often suffer from comorbidities; conditions that may occur:

Psoriasis affects far more than just the skin. The condition can have a severe and measurable affect on the quality of life. Affected patients may experience the following:

There is no cure at this time. Treatments aim to reduce inflammation, scale development, slow the accumulation of skin cells, and remove plaques. Treatments fall into three categories: topical treatments, systemic medications, and light therapy.

Creams and ointments applied directly to the skin can be helpful for reducing mild to moderate psoriasis.

People with moderate to severe psoriasis, and those who have not responded well to other treatment types, may need to use oral, subcutaneously injected or intravenously infused medications. The medications include:

Therapeutic doses UVA and UVB light may be helpful in reducing symptoms of mild to moderate psoriasis. UVA and UVB is delivered in a phototherapy booth or by a hand held laser or LED source.

Most people with moderate to severe psoriasis will benefit from a combination of treatments. This type of therapy uses more than one of the treatment types to reduce symptoms. Some people may use the same treatment their entire lives. Others may need to change treatments occasionally if their skin stops responding to what they’re using. 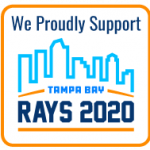 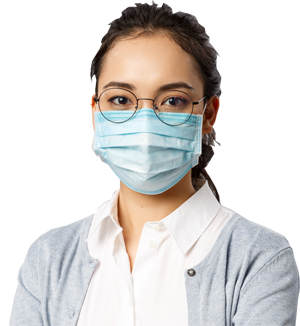